We’ve been in Berlin for two months now, but I find myself unsure what to say about it to friends and family back home. There’s no news on our residence permits except I find it embarrassing that my husband’s boss wants me to get a job. I’m happier here than I was in Boston, but I think that’s more about me and less about Berlin.

This city is not immediately beautiful. It is concrete and graffiti and parks filled with garbage after the weekend’s revelry. A lot of the graffiti is artfully done and what drew my attention to the garbage is the teams of people cleaning it up every Monday morning. The concrete buildings are around the corner from cathedrals whose bells I can hear as I type this, telling me that it’s noon.

I don’t feel like we’ve done much in Berlin yet. I can’t really tell you about any museums or historic sites. I can’t show you around Berlin’s infamous club scene (and I’m sure I’ll never be able to). I haven’t left the city limits. And I find myself wondering what I’ve been doing with my time. I’ve been working my book, of course, but I struggle to take myself seriously as a writer. If I don’t leave the apartment to go to a day job, I can’t really be working, right? And if I’m not working, why aren’t I experiencing more of Berlin?

It’s strange to be in Europe and not be traveling. Even when I studied abroad and was living in Barcelona, there was always a finite amount of time in which I could explore the city and take day trips or weekends away. And I had a built-in group of people (mostly other Americans studying abroad) to go on those sorts of adventures with. In Berlin I have E, of course (and a couple of friends, hi Ramona!), but the adventures we go on as a married couple who just moved here are different than the ones we would go on if we were on vacation.

Last Saturday, we were picking up a used phone E was buying from a guy he found on ebay classifieds, which is used much more widely than Craigslist here. In running this errand, we accidentally went for a 16-mile bike ride. Google maps said it would only take us 45-minutes to get from Friedrichshain to Pankow and gave us the distance in kilometers, which we didn’t think to convert to miles. We biked through a park, over a bridge, and past children playing in a stream. When it started to rain lightly, the families didn’t pack up and leave – they knew it would pass. It was just a brief summer storm.

It already feels like summer here. It’s 85 degrees (Fahrenheit, of course, Celsius still doesn’t mean much to us yet) right now, and there’s a heat warning, so I think this is about as hot as it gets. Our apartment still feels cool and comfortable. It was warm enough that I was out walking around in a tank top at 9:30 last night. It was even still light out. I’m trying to appreciate the sunshine and blue skies because I know they won’t last. I looked up sunrise and sunset on the shortest day of the year – E’s birthday – and it’s 8:15am and 3:55pm this year. Fewer than 8 hours of sunlight.

For now we’re enjoying the long days. One evening recently we stood on our balcony drinking beers and using an app to identify the birds that live in our building’s courtyard. Swifts and sparrows, hooded crows and wood pigeons. A lot of our evenings end with us drinking beer – it’s not so different from life in Boston.

Much of what we did there and much of what we do here revolve around eating and drinking. Earlier this month we spent an evening at Berlin Bierfest where craft brews from more than 20 local breweries were on tap. And when I say local, I mean hyper-local, 20+ breweries within city limits. For several Thursday nights in a row, we met up with friends for dinner at Markthalle Neun in Kreuzberg, which hosts “Street Food Thursday,” a rotating collection of pop-up stalls serving cuisines from around the world. We’ve had tacos al pastor, Brazilian tapioca crepes, grilled cheese on crusty bread, pear cider, baumstriezel, waffles. Maybe next time we’ll get spätzle or empanadas or momos. 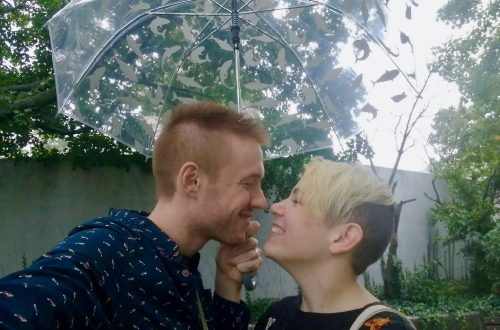 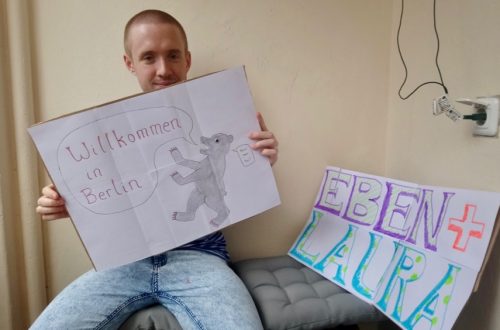